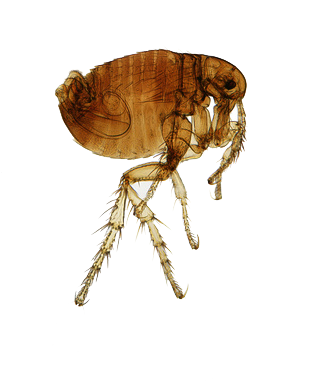 The cat flea is small at around 2 mm long, reddish brown in colour and is flattened laterally, a feature which enables it to move easily amongst the hair of its vertebrate host.

The most distinctive features of the cat flea are the large jumping legs and the row of black non-sensory spines on the front margin of the head and on the rear of the first thoracic segment. These bristles or combs are a diagnostic feature of the cat flea.

The eyes are apparent as are the antennae, and the mouth-parts, adapted for piercing and sucking, are typically seen projecting downwards from the head.

Where will you find them?

Although the cat and the dog are the preferred hosts for cat fleas – they are capable of feeding on humans, and frequently do.

The distress caused by the bites can be considerable in cats and humans. The cat flea is an intermediate host for the tapeworm, which normally develops in the digestive tract of the dogs, cats and some wild carnivores, but also occurs in man and particularly young children.

Vibration as a trigger for the adults to emerge from the pupa, mentioned above, frequently means that humans who go into empty premises where cats had previously been “in residence” suffer a high level of attack

Cats and dogs are the preferred host for fleas but they will feed on humans too. This can cause considerable stress for both pet and owner. The cat flea is also an intermediate host for the tapeworm, which normally develops in the digestive tracts of pets and wild animals but also in humans and particularly young children. When humans go into empty premises where cats had previously been living, their vibration can cause the fleas to leave the pupa and bite them.

Cat fleas are very small, around 2 mm long and are a reddish brown in colour.

Cat fleas have large jumping legs and a row of black spines on the front of the head and on the rear of the first thoracic segment. They have antennae and the mouthparts are adapted for piercing and sucking, typically seen projecting downwards from the head.  Fleas are common in households with pets throughout London Essex & Hertfordshire.

We provide Flea pest control services for all of London Essex Kent Surrey Hertfordshire and Cambridge.

Treatment consists of identifying the source, usually the host animals and treating it with a suitable veterinary product if appropriate. This type of treatment should be carried out by the owner of the animal or a veterinarian.

The pest controller can then apply a residual insecticide to areas used by the animal. Normally this consists of spraying all areas in the premises as a precaution.